RTA is focused on advancing a transit priority shoulder (TPS) for I-40, our region’s most important freeway.

An I-40 Transit Priority Shoulder would speed regional transit, quickly and reliably — in particular between the Chapel Hill area and the rest of the Triangle region. 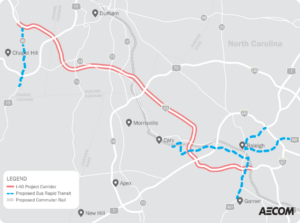 The I-40 TPS concept would provide for transit priority use up to 45 MPH in a widened left shoulder, adjacent to the median barrier, and next to slower-moving traffic on the Interstate during peak periods. Whenever traffic on I-40 is completely stopped, speeds would be restricted to 35 MPH in the TPS.

An important benefit of the TPS concept would be to provide improved transit connectivity from Chapel Hill, Orange County, and southwestern Durham County to the rest of the central and eastern Triangle area — including Research Triangle Park, southern Durham, RDU International Airport, and Wake County.

AECOM is conducting a prefeasibility study for RTA along the entire length of I-40 between the future Chapel Hill north-south BRT and Raleigh/Wake south BRT corridors. While that distance along I-40 is more than 25 miles long, regional transit buses would also benefit from much shorter trip lengths via the TPS. For example, buses traveling only 5 miles in a transit priority shoulder adjacent to the median could still save more than 10 minutes versus the current Bus On Shoulder System (BOSS) along the outside shoulder — that is very impressive time savings, especially as BOSS itself saves time vs. congestion in the “regular” I-40 lanes.

Kudos to AECOM for their work on this initiative, which is a natural complement to both the just-completed Freeway And Street-based Transit (FAST) study as well as ongoing commuter rail efforts. In addition, we thank our partners at NCDOT for exploring a preliminary cost estimate for part of a potential pilot TPS segment from RTP towards Chapel Hill; HNTB is assisting them as part of their broader express lanes study work along the Interstate.